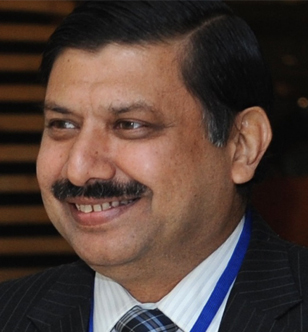 Director and Head of South and South-West Asia Office,

United Nations Economic and Social Commission for Asia and the Pacific,

Dr Nagesh Kumar is Director and Head of South and South-West Asia Office, of the United Nations Economic and Social Commission for Asia and the Pacific (UN-ESCAP) based in New Delhi. He has previously served as Chief Economist; Director, Macroeconomic Policy and Development and Social Development Divisions, based at the UN-ESCAP headquarters in Bangkok. Before joining UNESCAP in 2009, Dr. Kumar was Director-General of the Research and Information System for Developing Countries (RIS), a New Delhi based premier policy think-tank of the Government of India. He has also served on the faculty of UNU-MERIT in Maastricht, the Netherlands (1993-1998). Dr Kumar has served on the boards of the Export-Import Bank of India, the International Centre for Trade & Sustainable Development (ICTSD), Geneva; the South Asia Centre for Policy Studies (SACEPS), Kathmandu, among other institutions. He has served as consultant to the World Bank, ADB, UNCTAD, UNIDO, UN-DESA, UNDP, ILO, ERIA, the Commonwealth Secretariat, among others. A PhD from the Delhi School of Economics, Dr Kumar is recipient of the Exim Bank's first International Trade Research Award and GDN’s Research Medal. Dr. Kumar has researched extensively on different aspects of economic development, resulting in the publication of 18 books, over 30 flagship reports of United Nations and RIS, and over 120 peer-reviewed papers, attracting over 6200 academic citations. He tweets @nageshkum